In a detailed report launched by the group Canadians for Nuclear Energy, the case is made for the life extension and refurbishment of Pickering B as the least expensive path to secure 3+GW of emissions-free generation going forward.

Losing Pickering is bigger than losing all the generating capacity at Niagara Falls, a reference that may help people understand the scale.

Ontario faces an energy crossroad. Its world-class low-carbon grid is unprepared for the loss of 3,100 megawatts of clean, reliable power from the Pickering Nuclear Generating Station, yet the station is scheduled to close in 2025. Extending the life of the station would secure years of carbon-free electricity and thousands of high-quality jobs in STEM, manufacturing, business, and skilled trades.

President of Canadians For Nuclear Energy, Dr. Chris Keefer, speaks to CP24 about the challenge of electrification and deep decarbonization and how nuclear in Ontario provided 90% of the electricity necessary to eliminate coal.

We experienced an extremely cold January this year with numerous periods where the temperature was below -20C. At one point, it was -32C here locally. Quebec demand exceeded supply for a number of these events and they were importing power from Ontario, power we had an abundance of thanks to nuclear, hydro and gas capacity, as wind was nowhere to be found.

If we go back to Wednesday the 12th of January, wind collapsed for ~36 hours, 848MW and dropping at 4PM, not recovering until 4AM Friday. This was also when Quebec demand exceeded supply. Gas was ~5,600MW; so over 8GW without Pickering.

The Ontario Clean Air Alliance has made several claims lately that are not based in reality:

During extreme hot and cold events, shutting off air conditioning or heating (conservation) could be fatal for the elderly and other vulnerable members of our society. These events are not experienced in a vacuum, Quebec and Ontario were both hit with the same cold snap and Quebec was pushed beyond their supply capability, even pleading for residents to turn down their heat to try and curb demand.

60% of Ontario’s heat is provided by natural gas; the vast majority by fossil fuels including propane and oil. We are being encouraged to electrify heating and transport, both of these things will increase demand beyond where it is presently. In the above scenario, Ontario had no alternative but to burn gas, as that was the only reliable source available beyond nuclear and hydro. Conservation was not an option and you can’t import what isn’t there, made more obvious by the fact we were already exporting to that same party.

This brings us to the storage claim. Jack Gibbons has stated that 1 million electric F-150’s could provide double the capacity of Ontario’s existing gas generation assets.

Ontario will need more clean, reliable power in the future as we increase electrification. We clearly can’t rely on Quebec, nor should we, they do not expect us to. During the summer, the relationship is such that Ontario is a net importer, during the winter, we are a net exporter. This works for both provinces. Hydro is mostly tapped-out in Ontario with very little development potential. Wind doesn’t work during periods of high demand, and weeks-long storage has no economic case with batteries. Pumped hydro storage is widely unpopular, with even the small single Meaford project facing widespread opposition. This brings us back to nuclear and why it is absolutely idiotic for us to be shuttering a plant with 40+ more years left in it and replacing it with gas generation. With the world in the state that it is and the consensus that we must reduce emissions, Ontario already did! We phased-out coal, using nuclear. Prematurely retiring 1/4 of that capacity is criminal and why we must Save Pickering.

After having a several units down for maintenance during the low demand fall season, each were returned to service with the last unit, Unit 7, coming back online December 28th. This was timely, as on January 3rd, temperatures were down to -20C in some parts of Ontario and wind output had predictably collapsed.

A bold new commitment from Macron as Europe has battled with a continent-wide wind lull, soaring gas prices and lack of supply, the result of which has many nations falling back on coal. France, whose original nuclear build-out was designed to eliminate foreign resource dependence, has concluded from these recent events that they must build even more nuclear capacity to ensure that they are insulated from this going forward.

As an August heat wave rolls through, wind generation has decided to take a vacation. This emphasizes the point made numerous times by those knowledgeable on the issue that wind produces out of phase with demand, making it a low value generator with next to no capacity value. As Scott Luft noted on twitter: “I believe an electricity supply mix should be about reliability in meeting demand.” which wind utterly fails at doing. Pickering on the other hand, is running wide-open and providing Ontario with 3GW of reliable electricity.

As the heat of the summer approaches Pickering B Unit 8 is back in service, putting the site at full capacity (3,100MW). During the period of peak demand today Ontario’s 5,000MW wind fleet was producing approximately half the output of one Pickering unit, a common theme in the summer months where wind produces grossly out of phase with demand. Gas use has been high lately with a unit off at both Darlington and Bruce for refurbishment, so this return to service of Pickering 8 will provide some much needed relief on that front, driving Ontario emissions down, regardless of the weather.

On the morning of February 15th, 2021, Pickering B Unit 5, which received an HP turbine replacement some time back, hit 560MWe at 9AM. This feat was complimented by Unit 6 getting into the 530’s, both units showing remarkable performance for their age. Producing at 109% of nameplate capacity, this is a clear demonstration of the uprate potential of the Pickering units, which, if leveraged as part of the refurbishment efforts, will drive down the per kWh price necessary to recoup the cost.

As we waved goodbye to 2020 we also did so to another successful year for the four Pickering B units, representing 2,064MW of capacity which managed to produce 15.7TWh, putting their Capacity Factor at 87%, right up there with Bruce and Darlington. This was 4TWh more than Ontario’s 4,951MW industrial wind fleet, the output from which was mostly produced during the periods of lowest demand, a trait also identified by the OEB:

OPG’s plan to replace Pickering with methane (Natural Gas) is completely at odds with the object of putting a price on carbon, which is to drive consumers, including utilities, to other sources that have a lower, or zero emissions footprint. In 2019 Pickering avoided the consumption of 5.9 billion cubic meters (based on average gas plant efficiency) of natural gas for power generation, enough to heat millions of homes for a typical winter. As carbon pricing increases occur, the cost of every kWh generated by gas will become more and more expensive, increasing the value of Pickering’s ability to produce electricity with no direct emissions and satisfy Ontario demand during the peak summer months.

Pickering Nuclear Generating Station, located in the city of Pickering, Ontario, Canada, provides 17.5% of Ontario’s electricity and ~20% of its ultra-low emissions generation. If allowed to close in 2025, its output will be replaced by natural gas, driving up Ontario’s emissions dramatically, which are currently some of the lowest in the world. 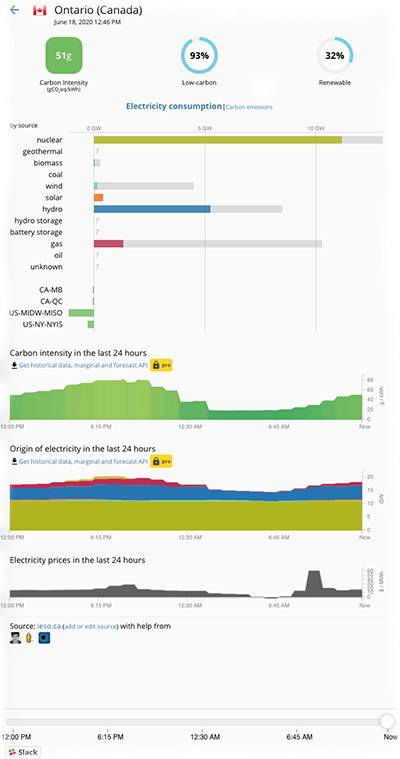